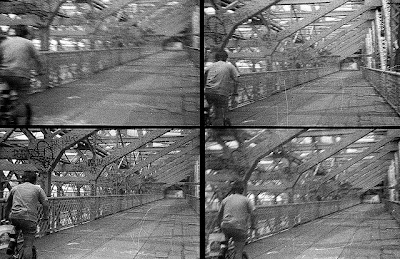 I was riding downhill in the dark alley, its uneven surface sending the bicycle along. The sweat was drying to a stickiness after the cooling downhill coast. The walkway busted out from underneath between the automobile lanes, and unto the streets. It was 1991. Tonight is 2011, twenty years ago that I last rode over the Williamsburg Bridge on a regular basis.

I went to school full time and worked part time in Manhattan. Tonight's ride across the bridge reminded me of the time when the pedestrian and bike lane was in disrepair. The south side was shut off and only the north side was accessible. The bridge was made of steel. It permitted the J, M, & Z subway to cross over the East River. Cars, delivery trucks, and motorcycles used its automobile lanes. In 1991, the walkway was falling apart. 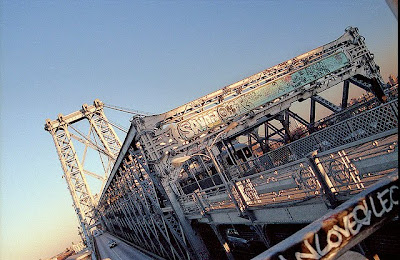 The walkway surfacing, which was some sort of industrial asphalt pliable matting, had been peeling off the thick steel plates. The steel plates themselves were worn, shifting, leaving gaps in where one could inset an entire foot. The walkway was poorly lit. Graffiti and broken bottles were abundant along the walkway. Broken bottles were a fact of life. I imagined the heat of the days gave way to drinking big 40 oz bottles of malt liquor in the nights. Perhaps people got so drunk that they slammed those glass bottles onto the walkway.

“Mr. Tuffy”, Sean my roommate told me. “Mr. Tuffy tire liners will prevent those flats.”
I was fixing a flat on my 10 speed beater bike. The walkway had caused my second flat in a month, I guessed. The walkway glistened in all hours of the day. It glistened because of the broken glass. From tiny slivers that slipped themselves easily into your bicycle tires on rainy days to huge broken bottlenecks that looked like makeshift weapons. Shards of glass, poor lighting, slippery steel plates were a part of riding over the walkway.

So I went and got tire liners. The flats didn't end. It became less often. There was a gritty thrill to riding over the walkway. It was a necessity. It was quicker to get to work and school. If I didn't have big things carry to school, the bicycle, not the subway was the way to go.

Tonight, twenty years later, there's still a thrill to it. Instead of broken glass glistening like jewels in the dark, a sheltering construct of red steel supports, smooth tactile surface, and cleanliness. No bumpy uneven dirtiness tonight. No swerving around holes and broken glass. It reminds me of Constructivist sculpture. North and south sides of the bridge were open to pedestrians. So democratic I thought, the grit seemed to have disappeared with the traffic and East River steadily flowing below. Despite the ebb and flow of maintenance conditions, bicycle riding remains an enjoyable and healthy choice.
Posted by F Daum at 1:09 PM No comments: Links to this post

Letitia James supports the firefighters rally for no firehouse closings, June 3, 2011. The rally included a peaceful march starting from Cadman Plaza over the Brooklyn Bridge to City Hall in Lower Manhattan. Besides thousands of people supporting the firefighters, speakers from different parts of the country gave short speeches for maintaining public safety.

Posted by F Daum at 12:18 PM No comments: Links to this post

What is New Orleans?

The audience answers Kermit's question- "What is New Orleans?" The camera was taking 8 second video segments, which explains the cut. This was actually a straight clip, no editing. This was from the Highline Ballroom, May 18, 2011. The entire song is available on Amazon.

Posted by F Daum at 12:09 PM No comments: Links to this post