The f-stop used was 1.4 to 2. I purposely used a shallow DOF to blur the background. In the future I may focus specifically on bridge of their noses (instead of tip) or eyes to get something different. I like these portraits. I've tried this same 30 yr. old 50mm AIS F mount on a Nikon D-80. The focal length is 75mm in the DX equivalence. It works just as good in manual mode. I'm not used to shooting full manual on a D-80 but with its 3 fps RAW+Large fine jpegs mode, exposure bracketing is not so tedious to undertake.
Posted by F Daum at 12:48 AM 2 comments: Links to this post 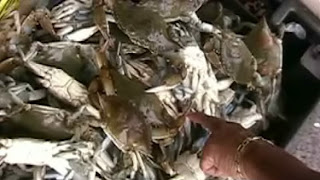 Watch the Video
I had to pick up a few tubes of paint in Chinatown. I had an hour on a parking meter so I did a very quick shoot on the way back from Pearl Paint. I'm playing around with the guitar & Garageband again so I added it to the footage.

Posted by F Daum at 9:16 PM No comments: Links to this post 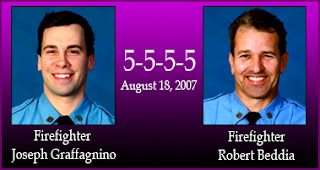 I worked at the fatal fire at the Lower Manhattan Deutsche Bank under demolition. The fire killed 2 Firefighters Robert Beddia and Joe Graffagnino. Whatever I blog, I check to to see if the city or newspapers says it first. It's better not cause cross chatter and speculation in my belief.

The newspapers and the city have mentioned toxic substances, non working standpipes, multiple maydays, and blocked stairwells. There were sectioned off areas where asbestos abatement was going on. The standpipes were dry. I was part of the multiple nozzle teams that stretched extra hoseline off a street level manifold and hiked 14 flights up to douse fire. We relieved a crew out of air and when we were spent as well- were relieved accordingly.

The victims were removed before I went up. The stairwells had blocked off plastic wrapped wooden air tight hatches which made it hard to evacuate or climb. It was something I have never seen in my short 4 years. I could only imagine patting around in the choking gas and fumes in complete darkness looking for these hatches in the pitch dark. These stairwells were hatched and narrowed to facilitate the demolition process.

When I was on the street level, I listened to multiple maydays. Like many others we observed radio silence so the maydays could be addressed. A hose line was already hoisted externally at this time because the standpipes were not in working order.
Posted by F Daum at 11:43 AM 2 comments: Links to this post

Worked at a 7 Alarm Fire.

Article here from the NY Times. Started working at 2nd Alarm, got relieved at 6th alarm, left the fire at 7th alarm. Two firefighters died, both from FDNY Ladder 5 Engine 24.

The building was under demolition and was only occupied by the construction crews. It had no standpipes for firefighting. Firehoses were hoisted 15 floors using ropes.

NY Times has a slideshow of this building under demolition, with explanations. All images NY Times copyright.
Posted by F Daum at 12:05 AM No comments: Links to this post Apparently I was big in Bangkok in this time period. Just uploaded my Aug. 15, 2007 episode and checked out the stats in Feedburner. I'm really not for popularity and being commercial. I felt disappointed half of my page views used IE 7- get Firefox already.
Posted by F Daum at 2:58 PM No comments: Links to this post

Watch the Video
A BJJ practitioner documents the scene with a polaroid camera spanning 10 years and counting.

This episode's links are Save Darfur, National Priorities Project, Veterans For Peace

Posted by F Daum at 2:44 PM No comments: Links to this post

My home as seen on Google Maps streetview. The place reminds me of the Stuart Little apartment house. The one on the center left is being done up like the one I'm in.
Posted by F Daum at 12:41 AM No comments: Links to this post

The Dance of the Giglio in East Harlem

Watch the Video
After dropping in on the guys at Vloggercue Frisbee 2.0, I happened upon the Giglio Society of East Harlem, honoring San Antonio. Our Lady of Mt. Carmel in East Harlem, NY is involved with this annual event.

Posted by F Daum at 9:40 PM No comments: Links to this post

Back To Full Duty, Thank Goodness 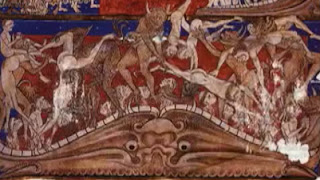 At one point I thougth I was going to be fired for videoblogging against corruption and racism on my time off. For a brief 2 months, my employer had to make sure I wasn't a danger to myself and others. I'm back to full duty now, thank goodness.

Some very important people in the place I work- people responsible for policy, well being, and lives, have no clue what a blog is. Maybe because it's not made by Microsoft or AOL. It's like the black monolith from A Space Odyssey: 2001. Maybe I can explain from the average web user knowledge base with my limited patience. What is this thing?

A long time ago, illiterate people had to look at cathedral ceilings to get a depiction of heaven or hell, listen in to the clergy, and pretty much live this way because books weren't plentiful. No one had the time to write them, make them or read them.

The printing press meant more books, cheaper costs to get the word out to people. If you didn't like one thing to read, well, there's something else to read.

He had this thing called the Rights of Man. Someone rich like Donald Trump can put out a full page ad in the New York Times or place superbowl ad fairly easier because he has more money. For the average guy, he would have to combine his efforts with 2 million other people just to get the same financial clout as Donald Trump.

Ok so before I get totally out of focus here, the business model of old media goes out the window with the level playing field of the web. Yes, this site is made with free tools and I've even made most of the material on this blog under a Creative Commons License.

For someone who has taken the time to vlog in front of the UN to promote dialogue (On Dialogue video episode), try at a lighthearted attempt the self defense video genre by way of the Vlog Santa (Vlog Militia Man video episode), encourage charity (Charity video episode), cross cultural exchange (Making Hummus I&II video episodes), make a 2 hour documentary on the victims of WW II, series of interviews of peace activists( United for Peace & Justice video episodes), and cover people at work at fires- it is an extremely distressing and insulting position to be in.

On top of that I've made podsafe free music, Creative Commons images and video for the sole purpose of creative cooperation.

To be considered as potentially making terroristic threats after publicly complaining about a racist rant made me feel like a victim of retaliation.

Who am I to complain? In the plains of Darfur, might makes right as people starve to death, get raped, beaten, maimed, and driven from their land.

The remedy in this situation seems to be say yes to whatever, become a racist, become anti anything from the Middle East (but not Jesus), not get the Buddha, and contribute to the dismantling of the Bill of Rights by bowing to censorship.

Where is it written that exercising free speech is against the Constitution of the United States? Oh oh, I'm not a majority, I'm a minority so I guess I don't a have right to ask this.

This episode's links are Save Darfur, National Priorities Project, Veterans For Peace

Posted by F Daum at 1:34 AM No comments: Links to this post