Watch the Video
Back to work, Monday. Garageband 1 loops & my own footage from the Botanical Garden.

A link to the Daily Kos. It would be great if Congress will agree to hold hearings. The pursuit of happiness requires housekeeping. The Bush Administration has made a lot of people in the world displeased with America and it has used our military for its own monetary interest.
Posted by F Daum at 9:49 PM No comments:

Watch the Video
Fun with the Internet Archive. The music is from "Pearl of the Orient". The knives are from "Knife Thrower and Children", "Boy with a Knife", and "Balisong Tricks". There are consequences.

Watch the Video
45 sec promo plug for my Blip.tv Vlog account. Footage is from Coca Cola called "Pearl of The Orient" from the Internet Archive. Music loops are from Garageband 1.

Flash version, Freevlog, CND
Posted by F Daum at 2:58 AM No comments:

This was from Sept. 19, 2006 in NYC. CNN keeps a record of casualties from Afghanistan and Iraq. I seriously think Bush and his friends do not care half as much as this guy. 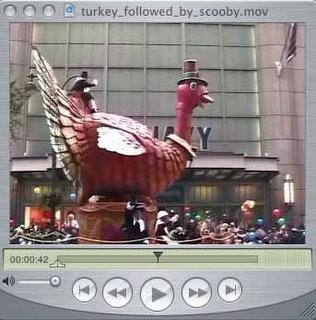 Scooby's here. To the bait and switch crowd, nihilists, and occultist naysayers who may see eating turkey and celebrating Thanksgiving as just a commercial enterprise, you can bugger off. I don't care if it's invented, it's a good thing despite the blood and gore of killing a turkey. Settlers and aborigines have interacted from the day Pilgrims landed, to Lewis & Clark, and the Oneida using Berlitz to get their language spread. So, to the nihilistic naysayers occultists who need some profound fulfilment, try some candied yams. Think about making a modest plate and enjoying it- but don't turn it down while not remembering the less fortunate. Go fast but don't flaunt it, so only your master will reward you.
Posted by F Daum at 12:55 AM 3 comments:

Watch the Video
C'mon, everybody is doing it, it's the coolest. Garageband 1 loops, Public Domain footage and soundbytes for Bottom Union's promo. Is this the 2nd year?

Flash version, Freevlog, CND
Posted by F Daum at 1:34 AM No comments:

In June 2004 I wrote President Bush about how troops were underarmored. I also disagreed how the troop levels were too low to disarm armed militias and control arms smuggling. I wrote the same letter to my senator and representative. This is the reply I got from the White House: view letter
I felt Iraq could just be an unpopular war controlled by a few politicians. In Dec. 15, 2005, I revlogged President Nixon describing the US situation in Vietnam. I felt that President Bush made an awful decision to drag the country into Iraq and made the domestic situation basically "if you're not with us, you're against us". He used the shock of the 9/11 attacks to get the Iraq invasion going. In March 2006 I blogged my frustrations at the Iraq War. Unlike the Bosnia conflict, the US weren't on a peacekeeping mission to stop a civil war. The US wasn't part of a large multinational force. The Bush administration started the chaos and we are made to repair it at cost of our military and civilians caught in the middle. How is the withdrawal going to pan out? Perhaps the surrounding countries may contribute to a stabilizing force? It's difficult to say. Whoever takes the Presidency from Bush will have to deal with withdrawing the troops without further destabilizing the region.
Posted by F Daum at 2:38 PM No comments:

Watch the Video
Fun with the Archive and Garageband 1. As with the post before this, it is CC Attribution-NonCommercial-ShareAlike; because not everything is about the money.

Watch the Video
I posted Vlog Militia Man (Inspired by Chuck Olsen's Vlog Santa) in Dec. 22, 2005, as noted by the Internet Archive. The Hummus Episodes (Parts 1 and 2) I did in Jan. 2006. On Dialogue was my bit on people rushing off to war and our need to recoup from such errors (July 23, 2006). I did a series from a peace march (11 posts, 5th one here). Keeping it rough. I tried cooking, editorial, self defense, and journal posts. I think my personal favorites are the ones on WW 2 survivors, vloggers, and peace marchers.