Watch the video
26.4 MB 5 min. My brief job history. Back in Sept. 11, 2001, I had a 10:30 AM eye appointment at 26 Broadway. I stayed out the night before to watch Jerk Alert (from Brooklyn) punk band at some Lower east Side Bar (Meow Mix). Some noise band also played and after their set I headed up north on Ave. A. I ran into a painter I knew, Kerry Law, who was in a band called the Moths (the NY, US one) and chit chatted. Behind him, I swear on my grandma's grave about 50 meters were white robed worshippers (from the 1st Ave Masjid I guess) walking south. My gut reaction was "Holy shit they're out tonight!" , I didn't say anything, it was the Lower East Side anyways. The morning after- I missed my eye appointment downtown. I would have been 4 blocks away. I think I would have hung around because I was a firefighter candidate at the time. I was starting to buff jobs. My eye appointment was leading up to my Lasik operation. My cousin was very upset because she actually worked by the DCAS and saw people leaping off.
Posted by F Daum at 11:49 PM 4 comments: Links to this post

Watch the video
One more new trailer for my vlog. iMovie4 and Garageband
Posted by F Daum at 12:38 AM 1 comment: Links to this post

My new trailer for vlog. iMovie 4, and Garageband.

Posted by F Daum at 12:35 AM No comments: Links to this post

When I author my short vlog posts on iMovie 4, I archive the files as DV. I have reached the point where I will be structuring the shoot with a storyboard and lights. I took the cue from Steve Garfield regarding lighting. As for the DV files, they are stored on a hard drive but can be authored in iDVD 4, if I need them to be.

Sound remains a challenge; self powered mics lose battery power causing diminished pick-up. Because of this I am sticking to my camera's on-board mic. I'm also keeping my video blogging in the black by not going HD.

I think mini DV NTSC is still ok for vlogging and home movies. I have clip lamps for lighting and a Kodak Photo Grey/ Video White Balance card I use for my indoor shoots. The white balance presets on my Mini DV cam are decent for daylight. Night scenes are not essential for my home movie making. If need be, artificial fog and rain will change my daylight scenes in iMovie 4. Good writing is most important.

The following months form letters will be on video and I might have themes for certain days (like ZipZapZop.com's Naked Fridays or Rocketboom's Casual Fridays). I might have Food Wednesdays or Archival Footage Tuesdays or Garageband Tune Mondays or FDNY Episode Fridays or Thursday Literature quotes. There's definitely a monthly form letter which is aimed at people writing to government officials regarding current events.

As of now I'm averaging two ok vlog posts a week. I think with the use of storyboards and better lighting, my vlogs will be quicker to post.

I am reprinting Michael Verdi's goals he set in 2004.

I think number one isn't too hard for a blog/vlog.

FireAnt is still in beta, but I always use it at home. iTunes 6 is fine for using with the Video iPod but FireAnt is quite versatile. You can check for new episodes for each channel and downloading is in the background.

So far I only use FireAnt and iTunes 6 to check my feed from Feedburner. From the Feedburner site- you can also choose different aggregators but I haven't checked them out. It's too bad NODE 101's Ryanne Hudson is pulling up her stakes and moving to Frisco. She's half of Freevlog.org. Freevlog.org's Michael Verdi and Ryanne Hudson turned me on to video blogging at the Soho Apple Store. They are coming out with a book in Peachpit Press on how to Video Blog.

Right now blogging/vlogging to me is like riding a bicycle- it's fun. I don't need to be overwhelmed by how something works. Things just work like a bottom bracket cassette or the Feedburner code that NODE 101 helped me put in my Blogger template.

Stuff works so it's doubly better to take it somewhere. I don't want to be like Super Dave and be extreme. I want to serve up some meaningful monthly form letters and have good things to share.
Posted by F Daum at 11:18 PM No comments: Links to this post

What is this tune?

War in iraq- CNN statistics of US & Coalition casualties

War in Afghanistan- CNN statistics of US & Coalition casualties

Posted by F Daum at 1:04 AM No comments: Links to this post

Watch the video
My sync ails, I'm working on it. Garageband 1 music and video are both share alike non commercial. I made the all th instruments stay the same the whole track, except for the three loops that that make up the horn section.
Posted by F Daum at 2:13 PM 3 comments: Links to this post

Watch the video
In the tradition of Big Audio Dynamite.
Posted by F Daum at 3:17 AM No comments: Links to this post

Watch the video
I really don't like dance music and whatever half hearted attempts I make using Garageband 1 is always tongue in cheek. One day it's all going to change, maybe Patrick Swayze will donate his Footloose to me.
Posted by F Daum at 3:05 AM No comments: Links to this post

Watch the video
The late US President Richard Nixon addressing American former POW's and defending secrecy in May 24, 1973 recorded on video.
Posted by F Daum at 4:36 AM No comments: Links to this post

Posted by F Daum at 3:45 AM No comments: Links to this post

Posted by F Daum at 1:31 AM No comments: Links to this post

When I passed the grueling physical test for city firefighter, I was an ovo lacto vegetarian. Nowadays I eat anything at the firehouse. At home though, I don't eat meat at all. I feel cleaner.

Music- me on Garageband 1

Kind Jayce Bartok and his sweet wife Tiffany have a project called Altered By Elvis. I was briefly in high school with Mr. Bartok in 1987. Since then he's continued his ways. His beautiful and caring wife Tiffany is a make up artist.

There Jayce, I hope you'll forgive me now for leading you along some very wrong paths. :)

Posted by F Daum at 1:19 AM No comments: Links to this post

To the Honorable Mayor Michael Bloomberg,

In the Daily News article dated Feb. 2, 2006, it is stated your preliminary budget proposal will cut "$32.9 million to city libraries, many...to reduce hours to four days a week".

In my neighborhood, the library already has reduced hours. For many people living in this great city, the library is a bastion of culture. Sadly it is also one of few places where one can find a clean, well lit, and quiet place to study. Taking away hours and days from the libraries will affect people from young to old. Please reconsider. You have stood for making information easier to access. Let that be the reality for the people of New York City and keep our libraries open.

Young and old alike will surely benefit by having a place to study, read, and become better informed. It has been an honor and thank you.

Sincerely,
Posted by F Daum at 12:18 AM No comments: Links to this post 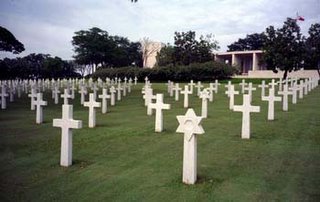 This is a WWII military graveyard. These are ones with headstones. The rotunda in the background has my grandfather's name on it. He died in the Bataan Death March and he was never recovered. In the picture you can find three Jewish headstones. When I was very young, racist people taught me Jews were evil people who killed Jesus. When I see these racists and I do my best to have as little to do with them as possible. I think they're either ignorant or sick- I choose not to help them.
Posted by F Daum at 2:47 AM No comments: Links to this post

I think it would good to have a form letter each month for current events. Using Project Vote Smart, and my form letters, I hope encourage communicating with elected officials.
Posted by F Daum at 2:19 AM No comments: Links to this post